You can’t go far in Phuket without running into an elite fighter. From Petr Yan to Khamzat Chimaev, Sittichai Sitsongpeenong to Anissa Meksen it feels like the island is full of the world’s best kickboxers and mixed martial artists.

Meksen is currently training at Phuket Fight Club and shared some training footage:

She doesn’t officially have a fight booked but appears to be ready for action. The French fighter also stopped by Blutree, the water park which has become a real favourite with fighters like her and Chimaev.

Thailand recently relaxed travel restrictions making it easier for travelers to enter the country. Business seems to be booming in the martial arts industry with some of the world’s best fighters in Phuket.

Covid-19 is still an issue and the likes of Marlon Moraes, Anatoly Malykhin and Marat Grigorian have all been affected. But fight cards are still taking place regularly and numerous fighters from major promotions like ONE Championship and the UFC are currently training in Phuket. 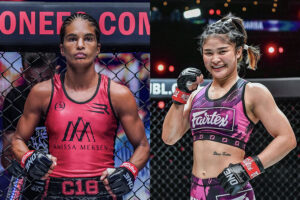