Australia’s Josh Tonna gets the chance to face Muay Thai legend Sam-A Gaiyanghadao on Friday in the main event of ONE: ‘Reign of Dynasties’.

The Thai fighter’s strawweight Muay Thai title will be on the line and Tonna, who is coming off a win over Andy Howson at ONE: ‘Warriors Code’ in February, is feeling confident,

“For my career and personally it (beating Howson) was a huge achievement for me. I really admire Andy and what he has done for the sport, in some ways I didn’t want to fight him, because I really like the guy and have huge respect for him, but in saying that, that’s exactly why I wanted to fight him as well. He was a big name coming to make a statement in ONE and I knew there would be lots of eyes on him and I wanted to boost my profile.” 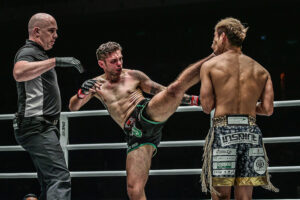 Tonna felt he was the underdog heading into that fight and was determines to upset the odds,

“I knew worldwide I wouldn’t have much support, but I believed in myself and thought I would win. I didn’t think about knocking him out but I reacted just right with the knee. I still have massive respect for him and look forward to seeing him in there with Rui Botelho or Daren Rolland soon.”

He will definitely be  the underdog when he challenges Sam-a for his strawweight Muay Thai title this week. The Thai has fought around 300 times and won numerous titles so there is no shortage of fight footage for Tonna to choose from. Sam-A defeated Rocky Ogden in his last fight. Tonna was fighting on the same card at ONE: ‘King of the Jungle’ and feels his compatriot could have been more tactically astute,

“Rocky did well against him, but I felt didn’t apply smart pressure. I want to pressure him but not rush in. It’s hard to make Sam-A make mistakes, but I feel I can and he will have a harder time in the later rounds with me.”

Tonna sees this as a date with destiny for him personally and a significant moment for Australian Muay Thai too,

“It really is a dream come true. Only a handful of fighters will get this opportunity, so I’m soaking it in and enjoying the journey. To fight for the belt and to fight a legend like Sam-A is gonna be huge for me and for Australia.” Tonna says his team has already come up with a game plan but he is prepared to adjust and adapt once the fight gets underway,

“We have our specific plan set. My typical style hasn’t changed much we have just trained to adapt to Sam-A. I’m going to approach it the same as any other fight, I have my plan but will adapt when or if need be. It’s easy enough to make a plan but things can go wrong, so you can’t be stuck in that mind frame and be prepared to change things.”

Winning the strawweight Muay Thai title would be a dream come true for Tonna, but he isn’t ready to stop there and has other goals in mind and wouldn’t rule out a change in ruleset to challenge Sam-A again,

“If successful I would definitely consider challenging him for his kickboxing belt. I think I would need another win against a high ranked fighter first to get use to the rules. At the moment though I am just taking it one fight at a time.” His career ambitions go beyond personal glory. Tonna is hoping to promote more Muay Thai fights in Australia and to eventually help ONE Championship come to his country,

“I would also like to grow my promotion and grow my profile in my home town and continue to grow the sport in Australia. I would love to be part of the development with ONE coming to Australia one day.”

The Covid-19 pandemic has made life difficult for many fighters but Tonna has a strong mindset and is confident he can cause an upset and take home Sam-A’s belt,

“It was hard at first as we, like everyone, were affected and went into lock down for six or seven weeks. I continued to stay focused on my goal though and trained through it all. That’s why I was able to take the fight. I am more then ready, I feel really strong physically and mentally and can’t wait to get the job done.”